Pedigree’s global mission is to make the world a better place for dogs, so that dogs can continue to make our lives better too.

With that in mind Pedigree asked us to find loving homes for the growing number of abandoned dogs throughout the country. Of the 3338 dogs that went into Auckland City shelters last year, only 671 were adopted. The majority of the dogs put down were young and healthy, with many more years of love and companionship to give.

Our objective was to raise awareness of the plight of shelter dogs and, at the same time, encourage New Zealanders to adopt a dog.

Pedigree were running out of ways to grow in a market with one of the highest rates of dog ownership in the world – where in families with school aged children it’s already very high (78%). Where else could we look for a new audience?

It turned out, there was a growing audience with low rates of pet ownership – those parents suffering from Empty Nest Syndrome – not quite retirees, but no longer running busy households, these people had the time and the money to care for a dog, but many didn’t consider adoption.

The perfect problem for Pedigree to solve, and so the perfect solution became obvious.

The Pedigree Child Replacement Programme targeted these ‘Empty Nesters’ with an unrestrained, comically blunt campaign encouraging them to adopt a dog and ‘move on’ when their kids moved out. All work directed parents to our the ‘child replacement’ website where they could match the characteristics of their child with the characteristics of an abandoned dog– ensuring the perfect replacement was found.

To further incentivise adoption we offered parents the chance to turn their child’s old stuff into new stuff for their dog. Bedspreads were turned into dog beds, and beloved jackets into dog jackets.

Our approach to increase adoptions was to build unavoidable intrigue around the campaign. This started with the name. ‘The Pedigree Child Replacement Programme’ was received with disbelief by media outlets, with its straight-talking honesty helping to spread the campaign through PR and paid channels. Our promotion to help parents convert their children’s stuff into new stuff for dogs built even further on that intrigue, with hundreds of parents tagging their children in Facebook posts promoting the service. 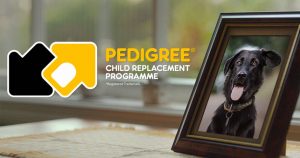 The initial touchpoint was through three films that played in cinema, TV and online. When viewed online each film directly clicked through to the ‘replace them’ website.

Click through banners on Skype took our message to lonely parents, while geo-targeted mobile banners encouraged parents in airports to visit our site the moment their kids left the country.

To further incentivise adoption, we offered parents the chance to turn their child’s old stuff into new stuff for their dog. Bedspreads were turned into dog beds, trophies into dog bowls and beloved jackets into dog jackets.

Everywhere parents were, we were there to offer them the love, laughter and companionship they’d been longing for in the form of a shelter dog.

Visits to the site far exceeded forecasted expectations, forcing us to find more shelter dogs to meet the demand. In six weeks we got more online dog adoption enquiries than in the last two years combined, helping to make The Pedigree Child Replacement Programme the most successful Adoption Drive campaign in almost a decade. In a country of just 4.5 million people, we achieved over 15m impressions during the campaign period.